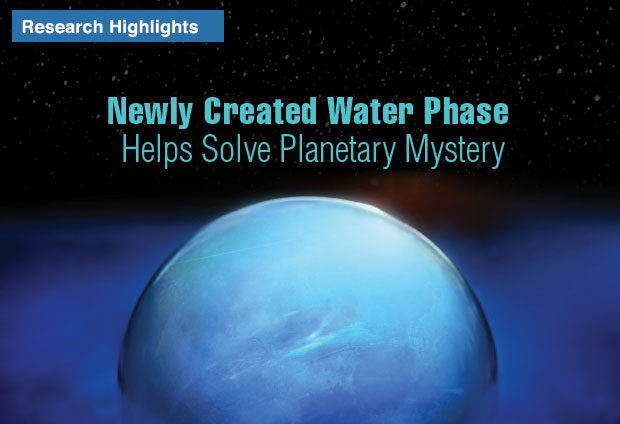 NASA's Voyager 2 spacecraft—launched in 1977 and still in operation—is one of the agency’s two farthest-reaching and longest-running missions, the other being Voyager 1. The journey by Voyager 2 to the outer solar system and beyond has been marked by many scientific firsts, including the first and only study of the ice giants Neptune and Uranus by a space probe. Perhaps the most intriguing of Voyager 2’s findings about these two distant bodies is their tilted magnetic fields. Unlike Jupiter, Saturn, and the terrestrial planets, the magnetic axes of the seventh and eighth planets are offset from the axes around which they rotate—by roughly a third of Uranus’s radius and even more for Neptune. In addition, the fields themselves are asymmetrical.

The magnetic fields of most planets are generated through large-scale motion of electrically conductive fluids. On Earth, this dynamo effect occurs in the liquid iron outer core. Researchers have been split on the composition of the solar system’s two most distant planets—and thus the origin of their tilted and lopsided magnetic fields. Many scientists envision these planets with fully fluid-convecting interiors, while others have proposed a more complex structure, consisting of a thin, electrically conductive liquid shell surrounding a thicker mantle of ice. If, as the latter theory suggests, the fields originate not deep within the planets but in the liquid just beneath their gassy envelopes, this unusual arrangement could explain the planets’ strange magnetic nature.

The primary ingredient in the proposed fluid and solid layers may be water, thought to make up more than 60 percent of Uranus’s and Neptune’s masses. Subjected to intense pressure, the ice in these planets’ mantles would bear little resemblance to ice on Earth, appearing black rather than transparent and remaining solid even at temperatures approaching those of the Sun’s surface. This exotic phase of water has been dubbed superionic ice. The role of superionic ice in the formation of the ice giants’ odd magnetic fields was first posited nearly two decades ago and has been supported by a series of increasingly complex molecular dynamics simulations.

However, creating and characterizing superionic ice in a laboratory setting—an essential step towards validating the simulations—has until recently proven a virtually insurmountable hurdle. Now, through a novel combination of experimental techniques, a team of researchers from Lawrence Livermore, the University of California at Berkeley, and the University of Rochester have successfully produced superionic ice in the laboratory for a vanishingly brief moment. (Work at Livermore was supported by the Laboratory Directed Research and Development Program.) The properties of ice created in the laboratory agree well with simulations, lending credence to the superionic ice mantle theory.

Water can exist in three phases—solid (ice), liquid (water), or gas (steam). On Earth, the one oxygen and two hydrogen atoms of a liquid water molecule form a loose V shape. As ice, the atoms rearrange and combine with other water molecules to form a more widely spaced hexagonal crystal structure, as seen in snowflakes—which is why water expands as it changes from liquid to solid, the opposite of most substances. This familiar form of ice is the only solid phase of water found naturally on Earth’s surface but is just one of 18 known crystalline ice phases. The other phases, distinguished by their arrangements of hydrogen and oxygen atoms, form under different pressure and temperature conditions, some of which are difficult to replicate in a laboratory setting. 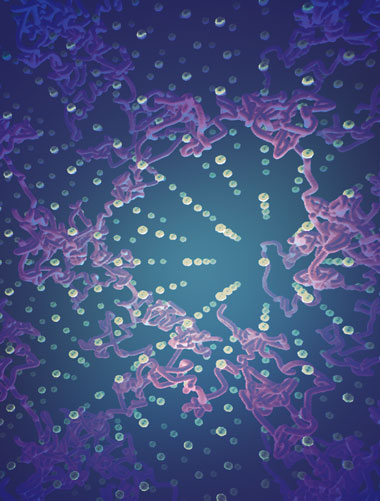 Once its structure has been thoroughly characterized, superionic ice may become the newest recognized ice phase, and perhaps one of its strangest. Superionic ice forms in conditions exceeding approximately 70 gigapascals—or 700,000 times Earth’s surface pressure—and 2,000 kelvins, which is approximately iron’s melting temperature at ambient pressure. Above these lower boundary conditions, the hydrogen nuclei (or ions) begin to jump rapidly from one ice crystal to the next with a motion resembling that of a fluid, despite the ice being considered a solid phase of water. (Meanwhile, the larger and heavier oxygen atoms stay fixed, vibrating near their equilibrium crystal position.) Because the hydrogen ions carry a positive charge, their fluidlike diffusing motion enables a type of conductivity known as superionic conductivity. In contrast, the more familiar electrical conductivity most commonly exhibited by metals involves the flow of negatively charged electrons.

Best of Both Worlds

From molecular dynamics simulations, scientists knew the temperature and pressure conditions most likely to produce superionic ice, but the path to reach those conditions was less obvious, in part because working with water can be surprisingly difficult. Livermore physicist Marius Millot, the project’s principal investigator, says, “We can normally conduct these sorts of experiments in a diamond anvil cell, a static compression platform that gradually squeezes a sample between two pieces of diamond. However, water is hard to study this way because it reacts with everything at high pressures. Diagnosing the sample’s properties therefore becomes quite challenging.” Computational chemist Sebastien Hamel adds, “Water becomes a ‘super acid’ that eats up whatever contains it. This property has ruined many past experiments.”

Another possible approach is dynamic compression, which typically uses lasers or gas guns to generate shock waves that raise temperature, pressure, and density rapidly enough to bypass the acidity problem—the experiment is over before the water can react with its surroundings. However, dynamic compression can heat a water sample too much, inadvertently yielding another phase of water. (See S&TR, December 2015, Smashing Science.) Millot therefore decided instead to combine static and dynamic compression techniques in a single experiment. Hamel provided high-resolution simulations to help Millot design the experiments. “Because we precompress the water, less shock-heating occurs than when shock-compressing ambient liquid water, allowing us to access much colder states at high pressure than in previous shock-compression studies,” explains Millot. 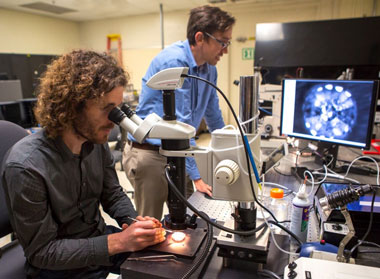 The superionic ice experiments took place in two parts, separated by over 4,800 kilometers. At Lawrence Livermore, Millot and his collaborators loaded a single microgram of water into a 5-centimeter-diameter diamond anvil cell (DAC) assembly containing tiny quartz plates, tailored antireflection and polymer coatings, and ruby microspheres. These cells were compressed at room temperature to 2.5 gigapascals, squeezing the water into an ice phase 60 percent denser than normal water. The Livermore team then transported the whole assembly from California to the University of Rochester’s Omega Laser Facility in New York. There, Millot worked with the Omega operations crew to position the DAC in the laser’s target chamber, where it was simultaneously bombarded with six nanosecond-long pulses of ultraviolet light. The beams sent shock waves through the sample, heating and further squeezing it. The laser-driven compression was so violent that the diamonds were vaporized by the end of each experiment.

During the brief, 20-nanosecond duration of the experiment, the team collected time-resolved optical pyrometry and laser velocimetry measurements to monitor the shock waves and document how the ice changed. “In our experiments, we look at the interface between shock-compressed and unshocked material. Think of it like a snow plow advancing through the ice,” says Hamel. The speed of the shock wave, for instance, can be used to determine the pressure produced by the wave. The temperature of the shocked sample can be inferred by measuring the heat radiated from the object in the form of visible light. In a series of experiments, these and other measurements enabled the team to “see” the formation of superionic ice and its transition to a liquid phase at approximately 190 gigapascals and 5,000 kelvins. The melting of the superionic ice was signaled by a discontinuity in the increase of the shock temperature and density in the sample in response to increasing shock pressure.

These upper boundary conditions matched predictions and supported the magnetic field generation theory—5,000 kelvins is hotter than the probable temperature deep inside Neptune and Uranus, indicating superionic ice could indeed exist in those planets. In fact, all the properties measured in the experiments were in good agreement with theoretical predictions and computer simulations. “Our experiment also showed 100 times higher ionic conductivity than other superionic solids, which was exactly what theory predicted,” says Millot.

Although the experiments were successful and produced findings supportive of previous research, the journey from experiment to publication was neither easy nor quick. In all, the team painstakingly assembled and fielded more than 30 targets over the course of two years to gather data across a wide range of temperatures and pressures. They then spent two more years analyzing the data and confirming that their findings agreed with decades-old predictions. However, when the drafted journal paper was rejected for publication, the team was forced to reexamine its results. Fortunately, Millot’s analysis of related metallic hydrogen experiments he had conducted at the National Ignition Facility (NIF) produced new insights. “I saw a signal in our NIF experiment similar to something seen in our superionic ice data and realized that some data we had thought was spurious was instead important,” he explains. “We therefore reanalyzed our approach and conducted a few more experiments, greatly improving the whole narrative.” The revised article was accepted for publication. 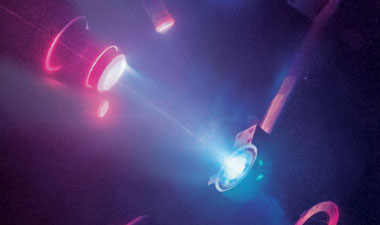 The experimental results not only confirmed the existence of superionic ice and lent credence to a theory for Uranus’s and Neptune’s odd magnetic fields. The findings also demonstrated the efficacy of a Livermore-developed experimental methodology—applicable to other laboratory astrophysics experiments—for compressing solids to high pressures and temperatures that are relatively cool by astrophysical standards. The work has also had other unexpected benefits. Millot now uses the new approach to analyze critical shock timing experiments for inertial confinement fusion research.

Furthermore, Hamel says that the experiments provide crucial validation data for his simulations. “Our molecular dynamics simulations rely on density functional theory. This theory has been validated and used repeatedly under ambient conditions but rarely verified at high pressures and temperatures because of the difficulty of conducting experiments in those regimes. Millot’s experiments are some of the first to validate the theory under those extreme conditions,” he notes.

These experiments are only the tip of the iceberg. After finishing their study of the crystal structure of superionic ice, the team intends to explore the properties of superionic ice combined with other elements, such as nitrogen and carbon. Such mixtures would more closely replicate the environment on Neptune, Uranus, and many water-rich exoplanets. Millot and his team relish the intellectual challenges that such experiments afford. “We can take advantage of NIF’s and Omega’s flexible laser systems and Livermore’s great ingenuity in target design,” he says. “The challenge is determining how to use these resources most effectively and design the best possible experiments. Experimental success or failure is determined long before we conduct the laser shot.”