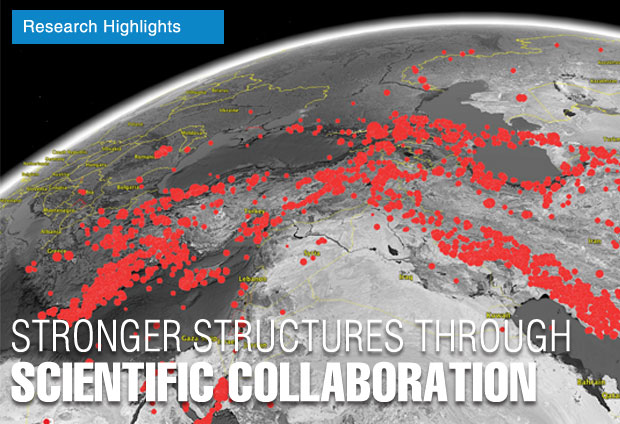 Target regions for probabilistic seismic hazard assessments (PSHAs) include Iraq, the Caucasus, and Central Asia. This image shows the locations of all earthquakes in the area that have had a magnitude greater than 5.0 since 1970. (Image courtesy of Google.)

In August 1999, Turkey experienced a 7.4-magnitude earthquake—one of the most devastating seismic events of the 20th century. The earthquake wreaked havoc on the major city of Izmit (located 104 kilometers from Istanbul), killing an estimated 17,000 people and leaving another 500,000 homeless. This disastrous event, along with a second 7.2 earthquake in November that same year, demonstrated to the country—and the world—the need for resilient infrastructure and adequate building codes.

Seismologists use various resources to forecast earthquakes and predict their possible strengths and repercussions. These resources include records indicating the locations of past earthquakes and active faults as well as analyses and models of ground motion characteristics. Most importantly, calculations of moment magnitudes, a measurement of the size of an earthquake based on its maximum wave amplitude, provide the most reliable measurement for an earthquake’s size. Using this diverse information, seismologists can perform area-specific probabilistic seismic hazard assessments (PSHAs) that inform seismic provisions in building codes—mandatory requirements for ensuring a structure’s integrity. “All buildings should be built according to these standards,” says Gok. “Past earthquakes have shown that modern building codes significantly reduce injury, death, and economic loss to communities.”

As part of SCP, Gok works with Livermore colleagues and a private sector collaborator, seismic hazard and risk consultant Dr. Tuna Onur, to conduct PSHAs and provide long-term support to local seismologists and engineers in target regions, including the Middle East, Caucasus, and Central Asia. PSHAs are conducted in two phases. First, researchers identify the tectonics and faults in a region and begin to compile an earthquake catalog, which documents the dates, locations, and times of past earthquakes. Second, seismic sensors, such as accelerometers, are implemented in the target region to monitor and analyze strong ground motions. Together, these data are used to help improve existing building codes to minimize the probability of structural collapse. 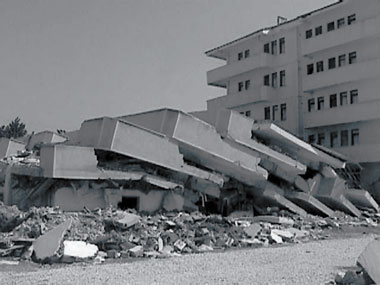 The 1999 Izmit earthquake in Turkey was one of the most devastating seismic events of the 20th century. As shown here, the violent shaking caused buildings to collapse, leading to the deaths of an estimated 17,000 people. (Photo courtesy of the U.S. Geological Survey.)

A prime example of PSHA planning and implementation was work done by Gok and colleagues over the last few years in Iraq. At the start of the project, the most updated version of the country’s national building code dated back to 1997. The code was primarily based on general ground motion prediction equations (GMPEs) and an earthquake catalog that lacked the last 20 years of seismic activity.

To develop a more cohesive and accurate moment magnitude–based catalog, Gok and the team first looked at “pre-instrumentation” earthquake data, such as historical written records, to help understand the country’s seismic past. Says Gok, “Part of the PSHA effort is enabling countries to engage with historic information as a way of creating modern building codes.” This information helps pinpoint potential source locations for future earthquakes. The team also looked at existing earthquake catalogs that contained instrument-derived data over time, starting with the Bulletin of the International Seismological Centre.

For earthquakes occurring after 1989, the team applied the Coda Calibration Tool (CCT), created by Livermore developer Justin Barno, to calculate reliable moment magnitudes for small-to-moderate-sized events. In seismology, coda waves are the residual vibrations post-earthquake that decay slowly and uniformly with time. In coda calibration, scientists measure the wave amplitudes at multiple frequency bands to determine source spectra at each seismic station in a particular region. CCT improves existing catalog magnitudes for PSHAs and provides a rapid and robust estimate of these features for the operational needs of seismic centers worldwide. The combination of these data results in a well-rounded and streamlined seismic record.

As part of the second phase of the PSHA effort in Iraq, Gok’s team installed equipment to measure both strong and weak ground motions in the target regions. Pending data from the instruments, the team used globally derived GMPEs that factor in local attenuation characteristics (the gradual weakening of seismic waves as they move away from their source) with attenuation tomography for the assessment. Together, past records, new measurements, and improved data through instrumentation serve as the basis for Iraq’s comprehensive earthquake catalog (published in 2017) and will factor into the seismic provisions of the country’s updated building code.

All this information is incorporated into a probabilistic framework to perform a PSHA and prepare seismic hazard maps for the new building code. Engineers calculate the forces that the building should withstand using the mass of the building and the accelerations from the earthquake shaking. The probabilities are helpful to determine acceptable risk levels. For example, a “2 percent chance of exceedance in 50 years” means that in the lifespan of a building (assumed to be 50 years on average), the actual earthquake shaking that will occur has only a 2 percent chance of being higher than the load levels that the building was constructed to resist. 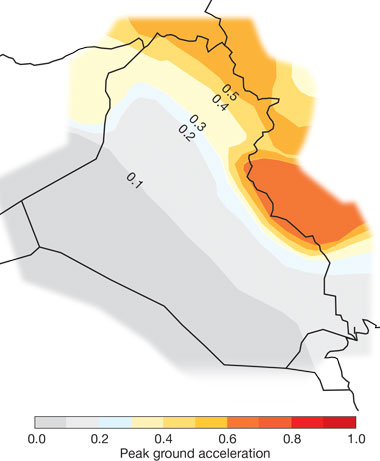 A seismic hazard map for Iraq estimates peak ground acceleration (as a fraction of acceleration of gravity) with a 2 percent chance of exceedance in 50 years. Areas that are most vulnerable to shaking are marked by a darker gradient. This information will be used to modernize the country’s building code to improve structural integrity.

In addition to completing Iraq’s PSHA, SCP held local training workshops and has continued to collaborate with seismologists and engineers in the area to help facilitate local adoption and document ownership and management of Iraq’s seismic data. Says Gok, “If we have trained local seismologists, geologists, and engineers to perform the hazard analysis, produce new seismic hazard maps, and enable the country to formally incorporate these maps into building codes, then we can consider the process a success.”

“In some cases, such as when large, three-dimensional topographical variations exist in a populated city, a PSHA is not enough to estimate earthquake ground motions and their effects,” says Gok. “In such cases, we use high-performance computing (HPC) to produce records of strong ground motion that can be used to generate GMPEs.” For example, the team used HPC systems to generate data for a 5.9‑magnitude earthquake on Iran’s largest island—Qeshm—in the Persian Gulf, which occurred on September 10, 2008. Using the Livermore-developed SW4 (seismic waves 4th order) computer code, SCP seismologist Arben Pitarka simulated long-period ground motions (5–20 seconds) for a broad region of the Persian Gulf affected by the event.

The SW4 code accurately models the surface topography of a region and the structural heterogeneity effects of an earthquake on elastic wave propagation—that is, the process by which particles are displaced by an external force and then restored to their original position by an equally proportional force. The seismic velocity (wave propagation speed) model used in the simulations covered a 700-square-kilometer area, including parts of both the Gulf and the nearby Zagros Mountains, producing waveforms that allowed scientists to create a map of the ground motions. The study revealed that an earthquake stemming from the Gulf could produce large ground motions at both the epicenter of the earthquake and along the eastern shore of the Arabian Peninsula because of the amplification caused by the area’s subsurface topography. 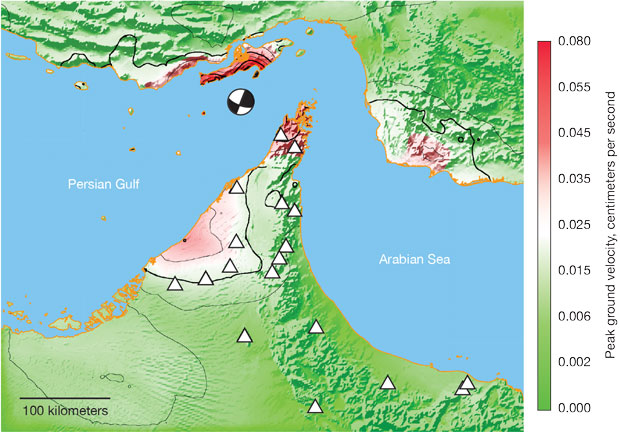 Seismologists simulated the long-period ground motions of a 5.9-magnitude earthquake on the island of Qeshm in the Persian Gulf. Triangles represent seismic stations while the circle reflects the direction of the pushing (black) and pulling (white) forces in the region.

Another important result of SCP’s work has been facilitating multilateral, regional collaboration among countries. “Teamwork is important because many of these countries share fault lines,” says Gok. “They have to work together to prepare for earthquakes.” The results align well with Gok’s goals for the project: improved earthquake disaster management through international partnerships, scientific data exchange, and promotion of science-based research. “You can change people’s lives with science,” she says.

Looking forward, Gok wants to conduct a PSHA in Central Asia after wrapping up work in the Caucasus region, for which a comprehensive earthquake catalog study is nearly complete. In Central Asia, the team has thus far conducted three PSHA workshops—in Kazakhstan, Kyrgyzstan, and Tajikistan—and received positive feedback from participants, including seismologists, geologists, and engineers. Paper records of instrumental seismicity in Central Asia go back to the 1950s, so Gok’s team is working to make those records more accessible. Says Gok, “We are digitizing millions of data entries using web-based tools in collaboration with local experts. These entries will help identify active earthquake zones and prepare realistic hazard maps.”

According to Gok, the work done by the PSHA team to aid countries in modernizing building codes and to better understand seismic risks in their regions is an important and necessary endeavor. She says, “People ask us why we bother conducting these assessments when we don’t know when an earthquake will strike.” For Gok, the answer is simple and sobering. “By determining the important seismic parameters generated through PSHA efforts, countries can better protect their infrastructure and their citizens. Earthquakes don’t kill people, structures do.”