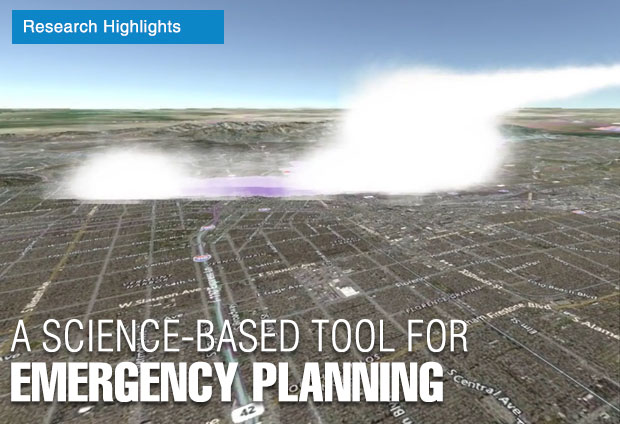 A Science-Based Tool for Emergency Planning

The Scout motto “Be prepared” applies to many fields, including federal, state, and city emergency preparedness. For several decades, Lawrence Livermore researchers have helped federal emergency officials and their state and local counterparts gain a better understanding of the science behind natural and human-caused disasters. (See S&ampTR, April/May 2015, Helping Cities Prepare for a Disaster.) As a part of that effort, Livermore engineer Maureen Alai and a team of Laboratory engineers, computer scientists, and health physicists have recently developed a planning resource that can assist local governments in determining the best actions to take following the detonation of an improvised nuclear device (IND).

The IND City Planner Resource (iCPR) grew out of an earlier request from the Federal Emergency Management Agency (FEMA) and other Department of Homeland Security (DHS) agencies to further the science-based understanding of what to expect from an IND detonation. Several years ago, DHS—which provides technical guidance for regional, state, and local authorities that prepare IND response plans—asked the Laboratory to develop a detailed assessment of how U.S. cities and regions could prepare for a hypothetical scenario in which a 10-kiloton (kt) IND detonates. Such a device would release energy equivalent to 10,000 metric tons of TNT. At the time, little science-based research existed on the likely effects and best mitigation strategies for a low-yield, ground-level IND detonation in a modern U.S. city.

Working with other national laboratories, technical organizations, and federal agencies, Lawrence Livermore demonstrated that local planning could save thousands of lives. The analyses, which originally focused on seven major U.S. cities, were well received and highly valued by the areas’ emergency planners. The success of this work prompted other cities and regions to request their own evaluations. However, a detailed city-specific analysis took approximately one year to complete, making it difficult to meet the growing demand for “more.” Born from this need, iCPR provides U.S. cities and regions a less costly, more efficient tool for developing response protocols.

The genesis of iCPR began when FEMA and DHS’s Science and Technology National Urban Security Technology Laboratory (NUSTL) asked Livermore to explore ways of providing faster, more cost-efficient analyses for emergency planners. As part of the effort, Alai and the research team were tasked with developing a tool that provided in-depth analyses for 60 major cities under 2 IND scenarios—1-kt and 10-kt ground detonations. Alai, along with colleague and materials scientist Amy Waters, proposed a standardized modeling and post-processing approach to develop a web-based tool for providing city-specific, scientifically based IND effects information. The approach leveraged the Laboratory’s computer science expertise and the modeling system at the National Atmospheric Release Advisory Center (NARAC). FEMA and NUSTL accepted their proposal, co-funding a three-year project to develop iCPR. 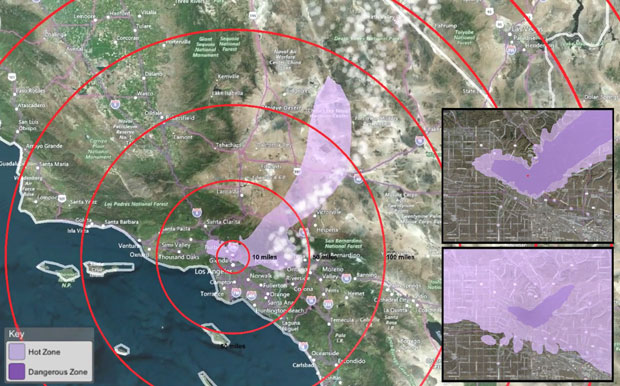 To help cities prepare and plan for the potential detonation of an improvised nuclear device (IND), the IND City Planner Resource (iCPR) provides downloadable animations that show how fallout radiation’s effect on an area evolves over time, from detonation out to one year. This hypothetical example illustrates plume projections (top right) 55 minutes and (bottom right) 11 hours after detonation.

Livermore’s Brooke Buddemeier, a certified health physicist, was the architect of the earlier city planning assessment strategy. The resulting documents from that effort provided key planning factors to substantially aid the response and recovery process by accelerating the speed of execution, improving public health and safety, and addressing major resource limitations and critical decisions before an incident. The technical foundation for iCPR stemmed from this previous work. Ultimately, a successful iCPR tool needed to provide users with several key features: an IND’s prompt and delayed effects (to guide evacuation planning); potential impacts to critical infrastructure and key resources, such as power grids and hospitals (to determine the availability of resources); building protection factors (to show how sheltering in structures could affect radiation doses from fallout); and injury and casualty information (to help ascertain the medical needs of victims).

Alai, computational engineer Stephanie Neuscamman, and statistician Kristin Lennox also identified two “uncertainty drivers” for the scenarios—terrain and weather. Alai explains, “Since the fallout cloud forms into the atmosphere’s upper levels, we initially speculated terrain might be unimportant in how fallout patterns evolve. Models and simulations showed differently. Based on this information, we set aside a simpler dispersion model in favor of a more complex one.” As expected, weather was a key driver for correctly modeling the IND fallout effects. The team tested and applied a statistical technique to 10 years of vertical weather data, obtaining the cities’ predominant weather patterns for each of the 4 seasons and over a 12-month period.

The project’s second phase involved incorporating the weather patterns into fallout and nuclear blast models for the 60 iCPR cities using NARAC’s modeling system. A federal facility located at Livermore, NARAC is the Department of Energy’s (DOE’s) plume-modeling center for real-time and predictive assessments of the effects of nuclear, radiological, chemical, biological, or natural emissions. The center’s assessments are used to inform decisions on actions to protect the public and the environment. 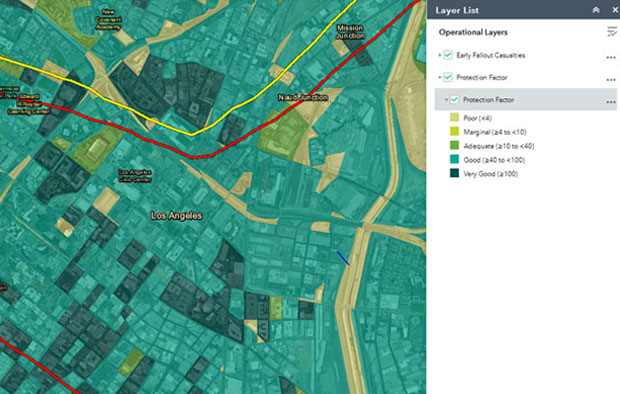 In addition, computer scientist Whitney Kirkendall developed an interactive geographic information system (GIS) component consisting of infrastructure and building protection modules. Using this capability, IND effects data can be overlain onto customizable maps. Alternatively, the DHS-supported Homeland Security Infrastructure Program Gold database, or Levatin’s building protection data, can also be overlain onto GIS and queried for each of the iCPR scenarios. This GIS component helps planners see the specific effects of an IND on their community.

Bringing Results to the Planners

The iCPR tool’s documents, animations, GIS capability, and supplemental resources are hosted on NARAC’s CMweb. In all, the hundreds of NARAC modeling runs for the iCPR effort resulted in 600 animations, 1,800 individualized reports, and the interactive GIS capability that integrates the data. Alai notes, “The results for each city or region include videos that track the fallout radiation for a year after the event. All the data is precalculated, and users can download the videos as well as scenario reports and GIS files, technical references, and federal guidance to help with their emergency planning processes.”

The enthusiastic reception of iCPR led to FEMA requesting additional planning tools—chemCPR for chemical events and bioCPR for biological emergencies. FEMA, NUSTL, and DOE also requested that Livermore expand iCPR to include additional nuclear detonation yields for planning an expanded threat portfolio. The iCPR end user base has also been extended to include state, local, and tribal emergency planners. 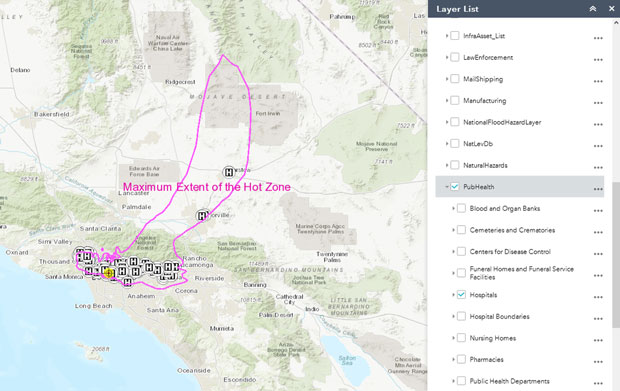 Emergency planners can use the interactive GIS at the heart of iCPR to display a fallout radiation zone on a map, change maps, and explore different critical infrastructure and key resources, such as hospitals (shown here).

Through their efforts to improve emergency preparedness, Lawrence Livermore researchers have taken on a leadership role in this important field. Buddemeier notes, “We are giving emergency planners the information they need to help save lives. For instance, hundreds of thousands of people may be saved through simple actions, such as sheltering in place for 24 hours.” Alai adds, “We are proud that our efforts to provide scientifically informed analyses in ways that are useful to nontechnical end users have been so well received. Proper planning, supported by effective tools such as iCPR, is key to emergency preparedness.”