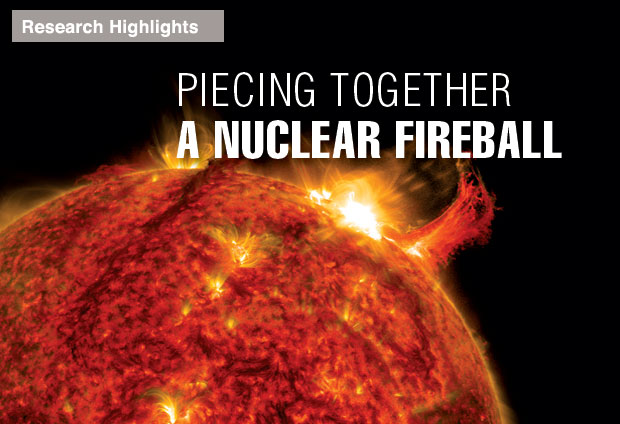 Resulting from the Sun’s nuclear processes, the erupting plasma from solar flares rapidly expands and cools similarly to what occurs in a nuclear fireball. (Image courtesy of NASA/SDO.)

Piecing Together a Nuclear Fireball

Materials vaporized by a nuclear explosion do not simply disappear without a trace in the resulting fireball. Leftover bomb materials and fission products remain, but these interact with the surrounding environment in complicated ways, making it difficult for scientists to unravel what happened in the explosion. However, by better understanding the chemical compounds that form in the cooling fireball, researchers can more effectively uncover evidence that can help identify the nature of the bomb that produced the blast. In the event of a nightmare scenario such as the detonation of a nuclear weapon in a U.S. city by a rogue actor, such forensic capabilities would be invaluable.

The tremendous energy generated by a nuclear explosion instantly vaporizes any nearby materials. On an atomic level, electrons are stripped away from gaseous atoms to form a plasma—a mix of ions from different elements and free electrons. As it rapidly expands, the plasma quickly cools back into gases, liquids, and finally solids. During this sequence of phase transformations, the different elements segregate according to their chemical properties and fractionate (that is, separate out) as they condense into solids, forming the particles known as fallout debris. All this begins to happen within moments after the explosion, once the temperature drops below roughly 5,000 kelvins and the pressure has subsided to approximately atmospheric level.

The ability to disentangle the effects of this fractionation process is essential for accurately piecing together a nuclear fireball. To study this complex fractionation process, researchers at Lawrence Livermore and collaborators from Stanford University and the University of Illinois at Urbana-Champaign (UIUC) have developed two different methods of physically simulating the plasma conditions in nuclear fireballs: pulsed laser ablation and the plasma flow reactor method. Research with the latter method is headed by Livermore radiochemist Tim Rose. “An advantage of having both methods running in parallel is that we cover two timescales, which differ by three orders of magnitude,” says Rose. “Pulsed laser ablation heats and cools very rapidly, in microseconds. However, events in a plasma flow reactor happen over tens of milliseconds, even as slowly as a tenth of a second.”

Starting as a project funded by the Laboratory Directed Research and Development Program, work with the plasma flow reactor method initially focused on one element at a time, looking at how each reacts with oxygen. Iron was examined early on as an element commonly found in debris and one that follows a straightforward pathway when forming chemical compounds.

A plasma flow reactor is an open-ended quartz tube, 1 meter in length and 4 centimeters in diameter, with a radiofrequency induction coil at one end. The coil forms a plasma torch that heats a constant inward flow of inert argon into a plasma. Dissolved in a nitrate solution, iron is atomized and injected into the plasma torch, the hottest part of the reactor. Livermore postdoctoral researcher Batikan Koroglu explains, “The end-to-end temperature profile along the tube is well constrained, steeply decreasing from 5,000 to 1,000 kelvins. The reactor operates in steady state, so that the setup is like a nuclear fireball frozen at a moment in time.” After physically mixing with the stream of plasma, the iron ionizes, then cools while flowing down the reactor tube and begins to react with oxygen to form individual molecules of iron oxide (FeO). These molecules condense into a liquid, which finally solidifies into FeO particles. 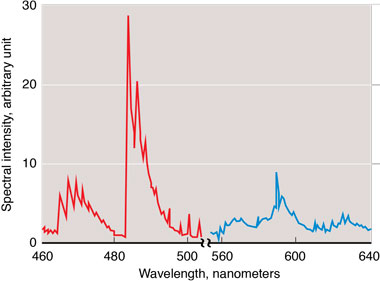 In experiments simulating conditions in a nuclear fireball, equal amounts of iron and aluminum were injected into a plasma flow reactor. The patterns of emission spectra, like separate sets of fingerprints, reveal the presence of both aluminum oxide (red) and iron oxide (blue) in gas at 1,740 kelvins that cooled from plasma.

By probing various positions along the tube in situ, optical emission spectroscopy reveals where the FeO chemically forms. This information in turn indicates at what temperature the reaction occurs. Inserted into the cooler end of the tube, a sample collector captures particles at different positions, thereby sampling different temperatures. Captured particles are analyzed using electron microscopy to uncover their morphology and microstructure. After iron, the researchers separately studied aluminum and uranium, also common constituents of nuclear debris. Once these individual metals had been looked at, combinations of metals were then evaluated.

Rose adds, “The oxide particles of uranium look different than those of aluminum, which look different than those of iron. Experimenting with multiple metals together results in even more complexity. For instance, an aluminum oxide particle that formed early in the process may have iron oxide particles sticking to it, indicating that the aluminum oxide condensed first.” Investigating the interrelation between metals provides more clues that researchers hope will lead to a better understanding of chemical fractionation inside a fireball.

Livermore physicist Harry Radousky, who leads the pulsed laser ablation work at Livermore, states, “Laser ablation is much different than the plasma flow reactor method in that it is not steady state. Instead, the method involves creating a plume of plasma that changes very rapidly in temperature and density. In addition, we can carefully control the surrounding atmosphere that interacts with the plasma.” Radousky, chemist David Weisz, and physicist Jonathan Crowhurst run the experimental aspects of this research at Lawrence Livermore while collaborators at UIUC conduct the kinetics modeling.

The team recently studied strontium and zirconium, both of which are fission products created after a nuclear detonation. As with the metals studied with the plasma flow reactor, strontium and zirconium undergo the same change in state—from plasma to gas, gas to liquid, and finally liquid to solid. To compare the dynamic behavior of these elements as they condense, the researchers use strontium zirconate (SrZrO3), an oxide with a uniform distribution of strontium and zirconium throughout its lattice. A crystal of SrZrO3 is mounted inside the reactor’s sealed sample chamber. A beam is fired from a neodymium-doped yttrium–aluminum–garnet laser, entering the chamber and breaking down the crystal’s surface layers into ions, which erupt as a plume of plasma initially at a temperature of approximately 10,000 kelvins.

(left) Collected at a location of 16 centimeters downstream from the radio-frequency coil of a plasma flow reactor, the aluminum oxide (Al2O3) particle shown in this transmission electron microscope image is a perfectly spherical, single-crystal condensate. (right) A similar image shows the results of an experiment conducted with both iron and aluminum together. The large Al2O3 particle, which condensed early in the cooling process, is surrounded by small traces of more volatile iron oxide particles (FeO), which condensed later.

Optical emission spectroscopy is again used to analyze the chemicals that form as the plasma cools. Filters reveal the spatial distribution of strontium oxide (SrO) and zirconium oxide (ZrO) as the plasma evolves over time. Researchers found that ZrO—a precursor to ZRO2—formed sooner than SrO in the vapor, which was consistent with their thermodynamic properties. In short, the stable and highly refractory oxide ZRO2 can exist as a solid at higher temperatures, and may condense earlier, than SrO. Weisz adds, “We then took the experiments one step further and demonstrated that the earliest ZrO formed from reaction with oxygen released by the SrZrO3 crystal, whereas later ZrO formed by reaction with gas in the surrounding environment.” These reactions were verified by conducting ablation with the sample chamber filled with oxygen-18, a rare but stable oxygen isotope. Because SrZrO3 is naturally rich in the more common isotope of oxygen (oxygen-16), the isotopic shift exhibited by oxygen-18 in the ZrO was easy to detect in its emission spectrum.

This oxygen-scavenging behavior yields insight into how early-forming oxides could reduce the amount of oxygen available for other types of compounds to form as the plasma cools. Laser ablation experiments were conducted with uranium, one of the key elements used in fission nuclear weapons. Again, two oxygen isotopes were used in the experiments to confirm the resulting uranium oxide’s stoichiometry (the numerical relationship of elements and compounds as reactants and products in a chemical reaction). As with the plasma flow reactor work, further understanding also leads to experiments of greater complexity.

Where the Forensics Lead

In an idealized nuclear airburst occurring high above the ground, the resulting fireball interacts only with air and bomb materials, resulting in debris consisting of relatively known and homogenous materials. However, the fireball from a detonation near, at, or below the surface will consume materials from the ground. Some of these materials will vaporize while others—especially in the fireball’s late stages—will remain solid. Rose says, “A debris sample picked up from the ground after detonation will represent not the initial composition of the fireball but rather what condensed out of the fireball at certain points in its evolution.”

A plume created by pulsed laser ablation erupts from a strontium zirconate crystal over a timeframe of 10 microseconds. The formation of zirconium oxide (blue) dominates the emission spectra early on, followed by the formation of strontium oxide (red).

As they better understand how individual debris components fractionate, the researchers have added more components to their experimental mixtures. This growing complexity better represents real-world scenarios and makes their experiments and the results increasingly accurate. In the future, researchers aim to study more components mixed together in a plasma, including silica and other carrier materials that might enter the fireball from the ground and remain solid. Eventually, this work will lead to a comprehensive understanding of the basic science behind chemical fractionation that is needed to create predictive models. Validated by both modern experimental data and historic empirical data, such models would prove invaluable not only to nuclear forensics investigators but also to those monitoring the consequences of a nuclear explosion.

“These models will allow us to examine matrices that are not necessarily represented in our test history,” explains Rose. “We could simulate an urbanlike matrix and see how the condensation patterns are affected, including whether the results match our predictions. This understanding of fractionation and debris formation would be extremely helpful if we ever have to collect debris after an unthinkable event.”