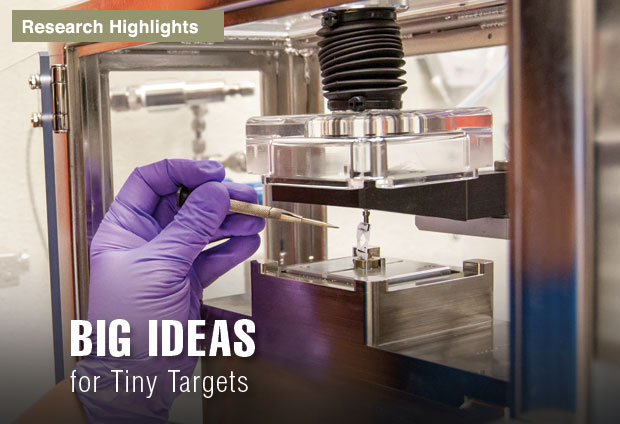 From the 10-story-high building that could hold 3 football fields (each 48.5 meters by 109.1 meters) to the 130,000-kilogram target chamber that brings together 192 laser beams, nearly everything about Lawrence Livermore’s National Ignition Facility (NIF) is gigantic—except the targets themselves. Nestled inside a cylindrical hohlraum is a spherical capsule only 2 millimeters in diameter. For inertial confinement fusion (ICF) experiments, the capsule contains a fragile, volatile mix of deuterium–tritium fuel. This sphere must rest securely in its berth until the laser beams converge inside the hohlraum and the capsule implodes, becoming the “star” of the experiment. (See S&TR, January/February 2016, A Growing Family of Targets for the National Ignition Facility.)

Research and development efforts focused on designing, simulating, constructing, and testing NIF targets include a multidisciplinary team responsible for one of the smallest and most important pieces of the target assembly—the material supporting the capsule inside the hohlraum. As group leader for target fabrication science and technology, Michael Stadermann describes this work as a multipronged challenge. “Supporting the capsule is a materials problem, an engineering problem, and a physics problem,” he says. “How do we make a material strong enough to withstand fabrication, handling, storage, and positioning, yet weak enough that the material doesn’t influence the fusion reaction? A successful capsule mount must provide sufficient support without interfering with the experiment.” 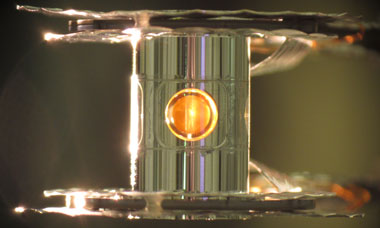 A target capsule, only 2 millimeters in diameter, is visible through a port in a hohlraum. (Photo by Eduard Dewald.)

Stadermann underscores the collaborative effort necessary for fielding new target components. He notes, “All difficult problems at NIF need a dedicated team to solve them.” Physicist Vladimir Smalyuk adds, “ICF is a complicated process. To achieve ignition, we need to understand how all features in the target affect implosion, then mitigate those effects if needed. It is a team effort from beginning to end.” Through careful coordination with specialists at each phase of development, advancements in capsule support technologies are as much about the process as the product.

From Sketch Pad to Target Chamber

A capsule support design usually begins as a drawing accompanied by physics calculations. Designers, engineers, and target fabricators weigh in as Smalyuk and other NIF experimentalists develop experimental platforms to define the test parameters, such as which data to measure and which diagnostic techniques to use. Stadermann says, “Deciding which concepts to pursue is a challenge.” Not every idea outlives the sketch pad, and no detail is too small for consideration. Changing even a single variable could have multiple effects on implosion, so the team uses computer simulations to predict a design’s performance. Smalyuk emphasizes the importance of focused experiments to complement computational results. He says, “Every experiment reveals something you did not expect.”

Once initially approved, a design then undergoes rigorous evaluation. A series of target fabrication tests is conducted, including materials testing to measure specific properties and determine feasibility, assembly testing to check for centering and static stability, dynamic testing for vibration and other factors, and cryogenic layering tests using Livermore’s Integrated Target Proofing System. Stadermann notes, “We have to demonstrate that the device can survive assembly before going any further. A design passes through many hands before proving its value.” A prototype that performs well in this stage moves on to the NIF target chamber, where shots are conducted to measure perturbations and implosion efficiency. Data produced by these shots are used to validate and augment simulation codes.

NIF experimental designs need time to mature. Simple capsule support designs can be ready for the target chamber in less than a year, whereas more complicated designs may require two or more years of preparation. Iterations can take another six months of development, even if only a minor modification is made, such as repositioning a piece by a few micrometers. “Each iteration increases our understanding of ICF,” says Smalyuk. “Nature is always more complex than our imagination.”

Supporting Something with Nothing

A decade ago, thin polymer tents provided an early solution to the problem of capsule support. In this setup, two membranes are attached to the walls of the hohlraum, one above the other, with the capsule suspended between them. The membranes are bent into tented shapes around the capsule’s peaks. Over time, NIF researchers realized that the tents caused pressure and density asymmetries, decreasing implosion efficiency. Smalyuk says, “Tents produced surprisingly large modulations.” Using x-ray radiography, scientists determined that these perturbations increased with tent thickness. However, thinner tents also had limitations—because of confinement, a film’s mechanical properties changed as its thinness approached a single layer of the molecules. These changes both led to film failure after target assembly and were predicted to offset the benefits of reduced thickness, so Stadermann and colleagues began exploring alternate approaches. 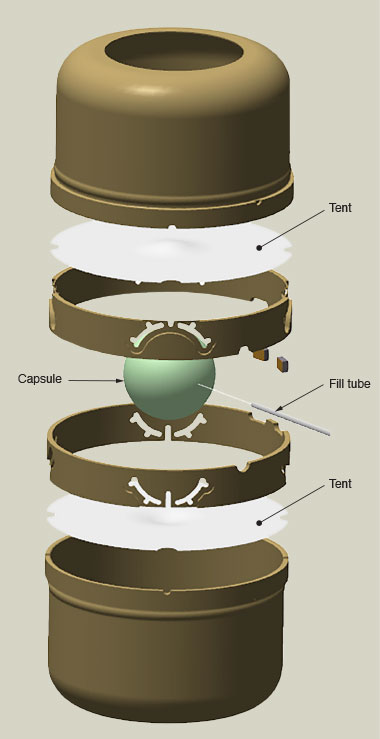 A rendering shows a design for target support that splits the hohlraum into four segments to minimize contact between the tents and capsule. Each tent is secured at its edge by two segments. Notches and holes in the hohlraum accommodate other aspects of target assembly and placement, such as a port for the capsule’s fill tube. One risk of this design is energy leakage through the ports or seams between two hohlraum segments.

By 2014, the team had come up with dozens of ideas involving a variety of materials and attachment techniques. Stadermann explains, “From there, we evolved our process to find common denominators and eliminate duplicates.” A major problem to solve with any target-supporting approach is reducing the amount of supporting material touching the capsule, thereby decreasing perturbation. Stadermann explains, “How can we support the capsule with as little material as possible? To put it more simply, how do we hold something with nothing? Making a material thinner or exposing it to cryogenic temperatures changes its mechanical properties. Designs that initially show potential can be eliminated because of this change.” Three solutions have come far in recent testing—a four-part hohlraum with polar tents, a supported fill tube, and the tetra cage.

Despite earlier outcomes, the team decided to continue exploring tents. The idea of sandwiching the capsule between two tents to reduce surface contact led to the four-part hohlraum, in which the walls of a hohlraum segmented into four parts clamp the tents’ edges. With a stabilized perimeter, the membranes touch only the capsule’s poles. Stadermann acknowledges the miniscule margins of error that come with fine-tuning the four-part design. He says, “When we reduce the amount of deflection, or bend, in the tents, the tents must be stiffened to have sufficient force for holding the capsule. However, if made too stiff, the tents can break during assembly.” This tradeoff, combined with the added task of stocking more hohlraum parts, is proving worthwhile. Data from multiple shots conducted at NIF show improvement over the original two-tent design, and the four-part hohlraum is now part of standard target production. 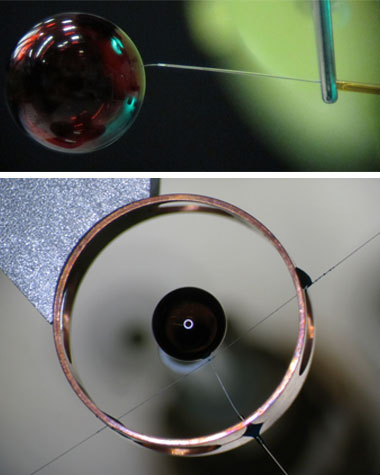 Livermore researchers are also exploring enhancements to an existing device used in target assembly, instead of supporting the capsule itself. (top) One approach involves creating a fill tube with a thicker diameter for all but 200 micrometers of its length. (bottom) Another method of supporting the fill tube includes a perpendicular cross-piece.

For another method of capsule support, the team looked more closely at the 10-micrometer-diameter glass tube that fills the capsule with fuel. A conventional fill tube is too flimsy to hold the capsule in place without drooping and causing vibrations. Furthermore, the capsule’s weight stresses its bond with the fill tube. Consequently, Stadermann’s team attached a rod to the hohlraum walls, running it perpendicular to the fill tube, with the tube resting on top. Testing revealed an issue with the cantilevered design: The closer the rod is to the capsule end of the fill tube, the more the rod affects implosion. In a modified concept called a “fishing pole,” the team expanded the fill tube to a thickness of 30 micrometers over most of its length, returning to the 10-micrometer diameter just short of the capsule’s surface. Again, the team discovered an unexpected effect. Smalyuk explains, “The fill tube produced shadows on the capsule from the hohlraum x-ray drive. These shadows would interfere with x rays angling off the walls, introducing asymmetry into implosion.” Therefore, these and related designs for fill tube supports continue to undergo stability modifications and hydrodynamic growth radiography testing.

A third approach to capsule support began with spider silk, an ultrathin substance known for its high density and excellent tensile strength. The team examined silk taken from live spiders caught in Stadermann’s garden and specimens ordered on the Internet but found the creatures’ silk to be inconsistent. The researchers therefore decided to make synthetic fibers using carbon nanotechnology. The process begins with a seeded catalyst subjected to thermal chemical vapor deposition, yielding a multiwalled “forest” of nanotubes. By twisting millions of such nanotubes together, the team generates thin, sturdy yarns that are then fortified with vapor-deposited polymers. Four yarns come together inside the hohlraum in an orthogonal configuration called a tetra cage. This innovative design supports the capsule between two pairs of carbon nanotube yarns—one pair under the capsule and one pair above. Stadermann states, “Now we are trying to shrink these yarns to less than 1 micrometer in diameter to reduce perturbations even further.” 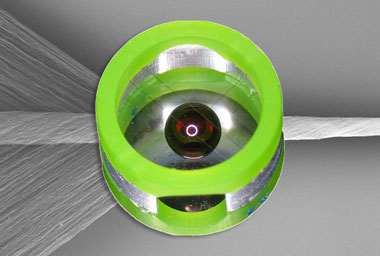 (back) Carbon nanotubes are produced in a densely packed forest. Individual strands are separated and pulled together into a wedge shape, then twisted into a yarn. (front) Four yarns make up the tetra cage formation, with the capsule suspended between two pairs.

Other capsule support concepts are in development. For instance, the team is working on a solution that uses magnets to levitate a capsule coated with a superconducting material, eliminating the need for a fill tube or tents. Another fill tube design positions the tube tangentially to the capsule instead of connecting perpendicularly to the surface. In another recent accomplishment, a 5-micrometer-diameter fill tube sufficiently supported the capsule while achieving the highest total neutron yield to date. Smalyuk notes, “Behind each split-second shot are years of teamwork. This neutron yield milestone was achieved because of all the hard work that came before.”