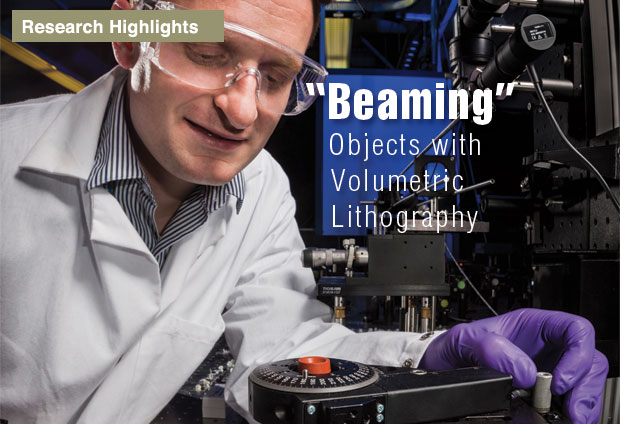 Brett Kelly, a University of California at Berkeley graduate student and Livermore collaborator, oversees the volumetric printing of an object by computed axial lithography. (Photo by Randy Wong.)

Set hundreds of years in the future, Star Trek depicts crew members wielding flip-to-open communicators to make surface-to-ship calls and using a replicator to instantly materialize food or spare parts. In the real-life present, smartphones have already outpaced those fictional communicators in many ways, and now we are on the verge of achieving another final-frontier technology, one capable of creating three-dimensional (3D) objects all at once rather than one piece at a time.

Researchers at Lawrence Livermore, in collaboration with the Massachusetts Institute of Technology, the University of California (UC) at Berkeley, and the University of Rochester, have invented two methods of volumetric lithography—using light beams to fabricate complex 3D polymer structures in one go instead of building them gradually. Livermore microtechnology engineer Maxim Shusteff says, “We wanted to explore how to make a 3D part all at once, and we decided that the easiest way would be to use light and some transparent medium. Immediately 3D holograms came to mind. Could we generate a hologram in a photosensitive material, so that the hologram cures into a physical object?” With the Laboratory’s holographic and computed axial lithography technologies—both developed with support from the Laboratory Directed Research and Development (LDRD) Program—the answer appears to be yes. 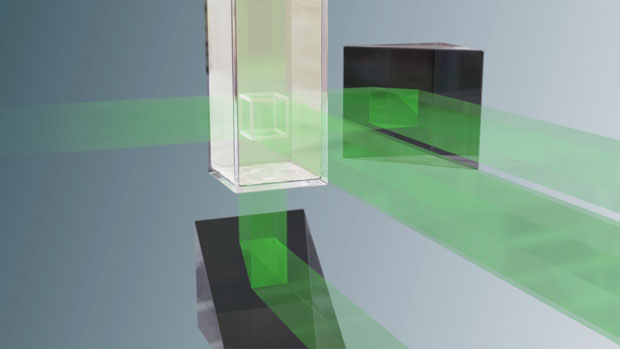 A simulation depicts holographic lithography, which begins by creating a three-dimensional (3D) hologram of the object to fabricate. A laser beam is patterned by a spatial light modulator and split into three image projection beams (green), each representing a different view of the object. Prism mirrors direct beams into a chamber containing light-sensitive resin. The resin cures wherever the three beams intersect, forming the object.

These new processes are set to energize the realm of additive manufacturing—also known as 3D printing—by combining it with lithography, which is already widely used to make microchips using photosensitive materials. In traditional 3D printing, parts are constructed layer by layer using a point source, such as a nozzle or a focused laser beam that moves back and forth across a surface to deposit or melt material in a desired pattern. In such printing approaches, an entire two-dimensional (2D) layer may be patterned all at once. However, these techniques all have drawbacks. Shusteff explains, “The layer-by-layer approach is slow. For example, if your part has a hundred layers and each layer takes a minute to print, then the part takes almost two hours to complete. In addition, the resulting parts can have zigzagging edges. This roughness is almost always undesirable. Furthermore, unsupported structures or disconnected islands of material that will later connect to another layer by an overhang or a span cannot be formed layer by layer. Our new approach of creating objects in 3D all at once overcomes these limitations.”

In holographic lithography, the first step is to generate a hologram of the object. Next, the hologram is broken down into three projections each representing a different orthogonal view, usually front-to-back, right-to-left, and top-to-bottom. A diode laser generates a 532-nanometer primary beam with a power of 5 to 50 milliwatts, and the beam is widened by passing through an array of optical components. After striking a spatial light modulator—an array of liquid crystal pixels on a silicon surface—the beam is patterned into the three projections spaced apart from each other inside the beam and which together comprise the single 3D image. 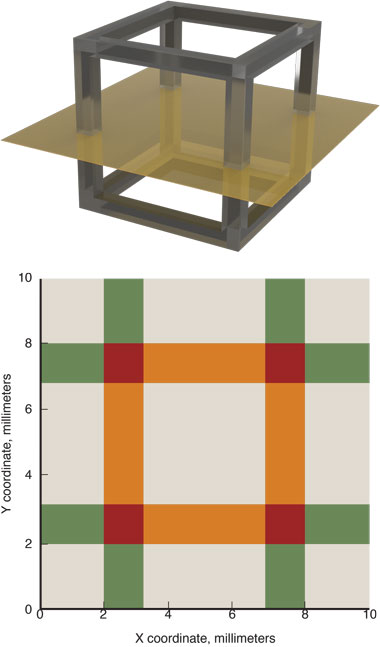 (top) A cubic lattice is shown as an example of a 3D object that can be formed by holographic lithography. The plane marks the cross section shown in the bottom image. (bottom) The relative intensity of light in the projection beams for the cross section is shown. Intensity increases with the number of beams intersecting—three beams (dark red), two beams (orange), one beam (green), and no beams (beige).


Refined by additional optics, the projected image overlaps two prism mirrors and a glass chamber, which contains a resin made of a photopolymer—polyethylene glycol diacrylate—with a small amount of photoinitiator. Two of the three composite image segments are directed by the mirrors into the chamber at right angles while the third projection shines head-on into the chamber. As these beams perpendicularly intersect in the chamber, the free-floating 3D structure forms in the resin as its photopolymer absorbs the light energy. A single exposure lasts only 1 to 20 seconds. Objects up to a few millimeters in size have already been successfully fabricated.

The absorption of light energy by the photoinitiator causes free-radical polymerization, a chemical reaction in which photopolymer molecules grow and link together. As the molecules interconnect by crosslinking, the material first achieves a gelatinous state and then finally cures into a 3D solid. In the case of a cubic lattice, for example, each projection beam has a cross-sectional shape like a square with thick sides and passes through the entire volume of resin like a square cylinder. Overlapping of the separate projections is called superposition, and at these spots the light is two to three times stronger than that of a single projection beam. The greater the intensity of light, the faster the curing occurs. Where all three projection beams converge to produce the maximum amount of light energy is where the object forms as the light energy exceeds the photopolymer’s dose threshold and crosslinking occurs. If three-beam superposition does not occur, the resin does not fully cure because the threshold is not exceeded.

Shusteff adds, “Part of the LDRD study was to determine where exposure should occur, how long exposure should last, how much light to use, what concentration of photosensitive material can achieve the desired curing rate, and how to assess the degree of curing. In short, a timing game is played. For example, if exposure is too long, the structure overcures, and resin outside of the three-beam intersections also starts to solidify.” 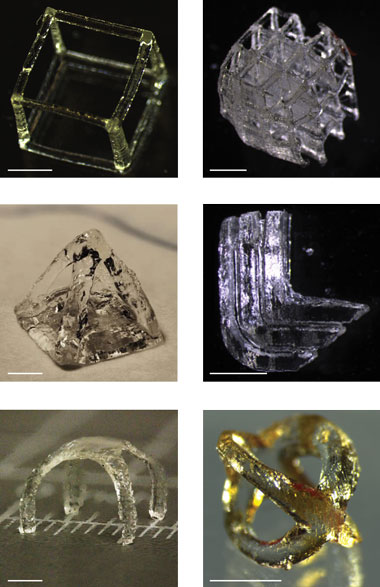 Photos show some of the hundreds of objects successfully fabricated with holographic lithography. The cubic lattice from the previous figure is shown in the top left. Each scale bar represents 2 millimeters.

Forming hologram projections with a spatial light modulator is a complex, demanding process. The laser must be stringently aligned by many optical components, including multiple lenses and filters. Measurements are also required to control speckle, that is, noise from the interference of coherent light. Shusteff describes another challenge: “The projection beams are basically like extrusions or collimated light and so cannot have features in the depth dimension. This characteristic imposes geometrical limitations on what structures can be made. To investigate the true limitations of geometric shapes, we developed an outgrowth project.” That investigation of possible geometries entailed asking whether the three projection beams could be aimed in other directions, not only perpendicular to one another. The team turned their attention to nonholographic projections and developed a method called computed axial lithography (CAL), which is a similar to the computed tomography used in medical applications but uses visible light instead of x rays. Brett Kelly, a graduate student from UC Berkeley, spearheads this effort at Livermore.

In CAL, the system generates a video portraying the complete rotation of projections of the 3D object to be fabricated. Kelly explains, “Instead of using three images, we use a sequence of 1,440 images, or 4 per degree of rotation.” For roughly 1 to 3 minutes, the video images travel through a lens and into a resin chamber whose rotation rate is synchronized with the video frame rate. Each image is a different 2D pattern of light and enters the resin from a different angle. Inside the resin, the light intensity increases through superposition. Kelly adds, “By summing up all these carefully designed images, we create a distributed 3D energy dose inside the resin. With multiple rotations, the dose becomes sufficient to cure desired regions while leaving undesired regions in liquid form.” The resin used is more viscous than that in holographic lithography, but the same crosslinking process forms structures on the centimeter scale. The structures cure upon completing up to three full rotations. Because CAL uses time-multiplexed images and a weaker light source—requiring more time for the dose to exceed the photopolymer’s light energy threshold—build rates are currently slower than those of holographic lithography. However, holographic lithography’s geometric constraints of are overcome.

Using computed axial lithography, a 3D model of the Eiffel Tower is formed. (left) Each video frame shows the shape from a slightly different perspective. (middle) Inside a rotating chamber, the beam reacts with light-sensitive resin, which begins to harden. (right) After about 2 minutes of exposure, the resin solidifies into the 3D part.

Shusteff sees holographic lithography and CAL as complementary. “We may not always be able to fabricate a part by spinning it around in CAL or not always have access to all sides to use holographic lithography. However, the chances are we can make any structure using one technique or the other or some combination of both.” The researchers are now eagerly looking to further push the boundaries of these technologies. What other materials can be used? Can the size of a shape be scaled up and down? How can the resolution be improved? What other limitations are out there? Determined work will answer these questions. Says Shusteff, “These are certainly the directions in which we hope to take this promising technology in the future.”