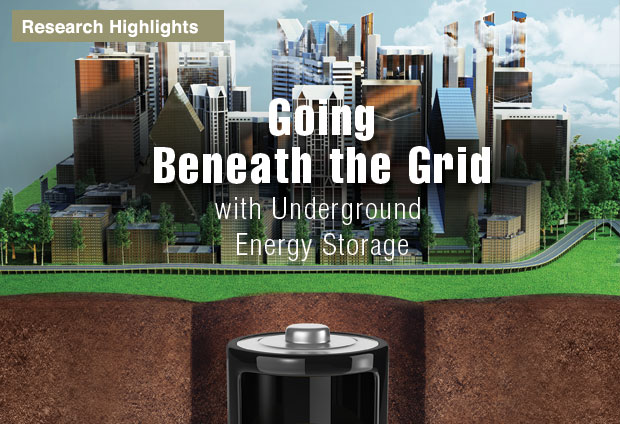 Going Beneath the Grid with Underground Energy Storage

Since 2000, the amount of clean energy generated annually    in the United States has increased by almost 63 percent, while carbon dioxide (CO2) emissions have decreased by almost 10 percent. This trend suggests a connection between the increased use of renewable energy and reduced CO2 emissions, which is good news for the environment. However, the increase in renewable energy production has not come without problems. In general, renewable energy sources are either cyclic (as in the case of solar) or unpredictable and seasonably variable (as with wind), often resulting in a mismatch between supply and demand.

In California, renewable sources account for approximately 25 percent of the state’s energy production, but the supply-and-demand mismatch means not all renewable energy generated is used. In fact, California’s renewable energy production has been so high at times that the state has paid other states to take on the excess to avoid overloading its electric grid. Thus an unexpected energy crisis exists—the crisis of producing too much. The problem stems chiefly from the lack of a grid system advanced enough to keep up with increased renewable production coupled with an inability to store energy for extended periods of time.

Livermore geoscientist Tom Buscheck and retired engineer Ravi Upadhye are working on a technology with the potential to solve both of these problems and help reduce CO2 emissions. Known as the Earth Battery, the approach uses multiple fluids to store energy as pressure and heat underground. The system includes features of compressed-air energy storage (CAES) in that compressed air can be used. However, the Earth Battery can also use compressed CO2 along with pressurized, heated brine to store and discharge clean energy.

The idea of storing compressed air underground as a renewable energy resource is not new. In fact, two plants in the world currently operate on this concept: the McIntosh CAES facility in Alabama and the Huntorf CAES Power Plant in Germany. Such conventional CAES systems take advantage of lower cost energy during off-peak demand hours to support energy generation during peak hours. During periods of low energy demand, electricity is used to compress air in several stages. The air is cooled after each stage to facilitate efficient compression, and the excess heat is released into the atmosphere. The relatively cool, compressed air is then pumped into an underground salt cavern for storage. During peak energy demand hours, the stored air is released into a piping system and mixed with natural gas for combustion in expanders, which rotate a generator to produce electricity. Conventional CAES successfully stores energy for later use, but limitations include wasting most of the heat generated during compression. In addition, storage of the compressed air in salt caverns limits storage to certain geographic locations and a duration of only a few hours. 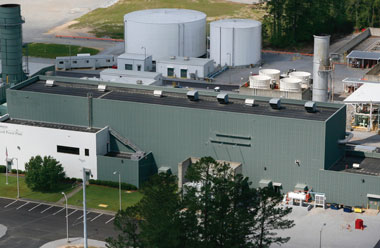 The compressed-air energy storage (CAES) facility at Alabama’s McIntosh Power Plant is already using CAES in generating renewable energy. The Earth Battery would use some of the features of CAES. (Photo courtesy of PowerSouth Energy Cooperative.)

Livermore’s Earth Battery concept improves upon CAES in several ways. Rather than disposing of the excess heat, the Earth Battery uses brine from an underground reservoir to cool the air after each compression stage and then stores the heat underground as hot brine. When electricity is needed, the hot brine heats the compressed air before the latter enters the expanders. This innovation eliminates the need to burn natural gas to heat the air. The Earth Battery can also store energy in porous rock, which increases storage capacity, storage times, and the range of possible sites. In addition, CO2 can be used instead of air, making geologic CO2 sequestration more economically viable and adding a pathway for reducing CO2 emissions.

Buscheck says, “In the Earth Battery concept, either air or CO2 can be used as a supplemental nonaqueous working fluid to store energy as pressure underground. We actually started with the idea of using supercritical CO2 captured from fossil-energy power plant emissions as the working fluid.” Research on the CO2 version is a collaboration between Livermore and colleagues at the University of Minnesota, Ohio State University, and Switzerland’s ETH Zürich. He adds, “The working fluid acts like a hydraulic jack to elevate the pressure and, being compressible, also functions like a shock absorber.” The benefit of supercritical CO2 lies in its dense, liquidlike state, allowing for a storage density that is 50 to 70 percent of the density of water, compared to only 10 to 30 percent when using compressed air. Supercritical CO2 can displace the brine and create artesian (that is, overpressured) flows to wells, thus producing naturally hot geothermal brine. The displaced brine can be further heated as necessary with a clean heat source, such as excess thermal energy from a base-load power plant.

Buscheck explains, “A challenge we have today with clean base-load power, such as nuclear power plants, is that they are very expensive to build but relatively low cost to operate and thus must be operated continuously to be economically viable. These plants create heat used to generate electricity. The Earth Battery does not require constant electricity generation. Instead, some of that heat can be stored underground for later use at peak demand times. This approach can also be combined with solar thermal energy.”

Because air is less expensive and less complicated to acquire than CO2, the team hopes to use compressed air to test the Earth Battery concept in an initial pilot demonstration project. Air would be a good proxy for CO2. Buscheck says, “Wherever we are able to demonstrate that air can be safely stored, storing CO2 efficiently and safely should also be possible.”

The next step in establishing the concept was determining what type of reservoirs could be used for energy storage. Buscheck explains, “The reservoir must be a porous, permeable rock formation overlain with an impermeable caprock, so that the buoyant, pressurized fluids can move freely out of and into the wells but do not leak into shallower rock formations.” In a feasibility study funded by the Laboratory Directed Research and Development Program, the team examined two stacked reservoirs—an upper reservoir for storing air and a lower reservoir for storing hot brine. Sedimentary rock, such as sandstone or limestone, is often permeable enough to store air, CO2, and hot brine, while shale caprocks should prevent upward leakage of the fluids. Such geologic formations—already used for CO2 and natural gas storage—are widespread and would allow for more possible deployment sites. Because natural gas has properties similar to those of air, the team’s technology could even be used in depleted gas production fields, which are more widespread than natural gas storage sites. 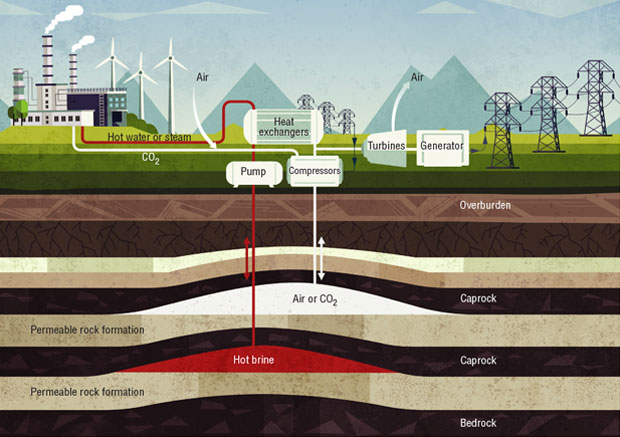 As shown in this greatly simplified illustration, the Earth Battery contains two or more compression stages and two or more expansion stages. During the charge (compression) cycle, air is compressed and cooled multiple times before being stored underground, along with hot brine. During the discharge (expansion) cycle, high-pressure cool air—or carbon dioxide (CO2)—and hot brine from the wells are cycled through heat exchangers and expanders before the air or CO2 is finally released into the atmosphere and the cold brine is sent back underground. The Earth Battery can also store heat from an external source, such as a base-load power plant.

From Earth to Grid

Once adequately stored, how can energy be quickly extracted from the ground when needed to produce electricity? With the Earth Battery, energy is retrieved by letting the pressurized air and hot brine flow to the power plant, which converts the stored energy to electricity. This setup differs significantly from renewable geothermal energy, which requires up to half of the generated electricity simply to retrieve the hot fluid for use by the power plant. This effort, known as the parasitic load, reduces the net power that a plant can deliver to the grid.

In contrast, the Earth Battery uses excess energy to create artesian conditions in the storage reservoirs, so operators can take advantage of time shifting—strategically planning when to impose the parasitic loads needed to create artesian conditions. With a gas turbine, about two-thirds of the power generated is used to compress air, leaving only about one-third of the gross power as electricity for the grid. With time shifting, inexpensive energy from off-peak demand hours can be used to precompress the air and generate heat so that when electricity is most needed, the majority of the gross power can be delivered to customers. This process makes more energy available when demand exceeds supply, such as on cloudy or windless days.

An advantage of using supercritical CO2 over compressed air is the thermosiphon effect of CO2—the reduction in CO2 viscosity upon heating by hot underground rock, allowing CO2 to flow more readily. Flow rates are also increased by the expansion of CO2 as it is heated. Furthermore, the Earth Battery circulates the CO2 in a closed loop, constantly maintaining supercritical pressures and thereby reducing the parasitic load required to reinject the CO2 back into the reservoir. A closed loop keeps CO2 from being released into the atmosphere, whereas the use of air allows an open loop, resulting in air being exhausted into the atmosphere.

Although using CO2 entails a longer development horizon than using air, the former offers the dual benefits of storing energy and keeping captured CO2 out of the Earth’s atmosphere. To enable the quick extraction of energy when needed, the team plans to use excess thermal energy to keep the heat exchangers hot, thus reducing ramp-up time when generating electricity. Says Upadhye, “It’s like taking a shower. You normally have to wait a minute or so for all the pipes to get warm, but if you already have hot water circulating, it will be available more quickly.”

To test the effectiveness of their technology, the team has used the NUFT flow-and-transport code and Aspen Plus process-modeling software to assess the efficiency and cost of various energy storage designs for using compressed air. The researchers hope to soon launch a pilot demonstration project using a handful of air injection and production wells. Says Buscheck, “We would first field-test underground air storage and probably store the heat aboveground by more conventional means, or we might try field-testing heat and air storage in the same section of rock.”

The team factored environmental considerations into the development of their technology as well. “An environmental concern is induced seismicity, that is, earthquakes caused by increased underground pressure,” says Buscheck. He explains that ideally, the hot brine and air storage zones would be arranged in a manner that allows the air to function as a shock absorber for both fluids. “We are putting a lot of thought into reservoir pressure management to minimize the risk of seismicity. In fact, reducing seismicity was one of the first topics we examined. We want to ensure that the Earth Battery is safe in addition to being cost effective and environmentally responsible.”