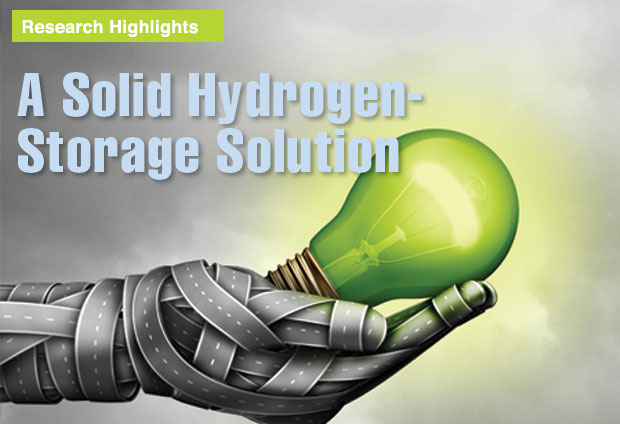 The key to solving some scientific problems lies in viewing them from multiple angles, taking into account various disciplines including physics, chemistry, mathematics, and computation. At Lawrence Livermore, early-stage research to store hydrogen in solid materials, such as metal hydrides, could be a boon for advancing the hydrogen fuel economy. New results from these efforts, gleaned from this multidisciplinary approach, are reinvigorating scientists engaged in creating a technology infrastructure to produce, distribute, and store hydrogen for fuel cell–based transportation and other industrial applications. Such advances could ultimately transform the hydrogen economy and enable energy security, energy storage, and economic growth through cutting-edge emerging technologies.

One significant challenge to this work is determining how to store enough hydrogen for transportation applications in a sufficiently compact, efficient form factor. Although hydrogen-powered vehicles are on the road today, they require large, heavy, cylindrical tanks of compressed gas. “These cylindrical tanks are needed to keep stresses from building up, but they take up significant room in the car,” says Livermore materials scientist Brandon Wood. “Also, the energy penalty to compress gas into the tanks is high.” 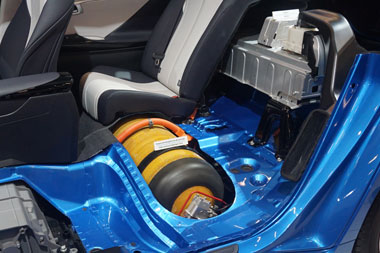 Hydrogen storage tanks for vehicles, such as the one seen here in a Toyota Mirai, are large and cylindrical. By storing hydrogen within a solid material rather than as a pure compressed gas, more hydrogen could be contained in smaller vessels that better fit automotive interiors. (Photo courtesy of Mario Roberto Durán Ortiz. Licensed with CC BY-SA 4.0.)

To store a higher concentration of hydrogen more compactly, scientists are looking to solid materials that can either physically absorb the gas or chemically combine with it. “It’s counterintuitive,” says Wood, “but you can make hydrogen denser if you store it within a solid material rather than as a pure compressed gas. Solid-based storage would also enable development of gas tank designs that are better fitted to an automotive interior than a cylinder.” Such systems must operate at reasonable temperatures, absorb hydrogen in the time it takes to fill a typical gasoline tank, and promptly release hydrogen into the fuel cell as needed—a seemingly insurmountable feat.

Despite the challenges, scientists are not giving up. Wood and other Laboratory researchers are involved in a multi-institutional project called the Hydrogen Storage Materials—Advanced Research Consortium (HyMARC) to accelerate technology development. Funded by the Department of Energy’s (DOE’s) Fuel Cell Technologies Office within the Office of Energy Efficiency and Renewable Energy, HyMARC’s ambitious goal, says Wood, “is to provide the foundational understanding of the kinetic and thermodynamic processes that govern hydrogen storage in materials and to equip the research community with tools that enable the development of on-board solid-state hydrogen storage materials.” HyMARC partners include Lawrence Livermore, Lawrence Berkeley, and Sandia national laboratories, as well as collaborations with several universities and other institutions. While Livermore leads the theory and computational aspects of the project, Sandia spearheads activities to synthesize the materials, and Lawrence Berkeley primarily provides material characterization through chemical analysis.

HyMARC’s approach to technology development is fundamentally different in organization from earlier research strategies. It encourages scientists to work more cooperatively on theory, data, synthesis, and materials characterization, and to proliferate knowledge through databases that the entire community can share. “The project is a cultural shift from how scientists typically work,” says Livermore computational materials scientist Tae Wook Heo. HyMARC is one of several consortia that constitute the DOE Energy Materials Network. Within this network, three groups specifically address the multiple challenges related to hydrogen infrastructure. By simultaneously developing new capabilities and methods and integrating them with specific projects at partner institutions, the researchers aim to more quickly solve technical problems and further emerging technologies.

In collaboration with colleagues at Sandia, researchers at Maahidol University in Thailand, and the National Institute of Standards and Technology, Wood’s team set out to understand the chemistry of a nanoconfined lithium–nitrogen–hydrogen system wherein each pore within the confined space is measured in nanometers. The research revealed the underlying chemistry and showed how eliminating intermediate species in the reaction pathway can accelerate the uptake and release of hydrogen.

Lithium nitride can combine with hydrogen to form lithium amide and lithium hydride and release hydrogen as a gas in the reverse reactions. However, the reactions are slow, in large part, scientists hypothesized, because they need to form an intermediate species before completion. Wood says, “We reasoned that if we could bypass the intermediate species by confining the active species into a medium, the reactions might cycle more quickly.” 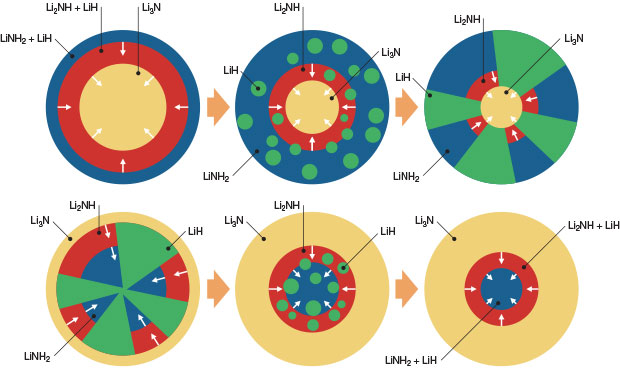 The Sandia team devised a method to nanoconfine lithium nitride in a matrix of porous carbon to speed the reaction. The researchers conducted experiments and executed molecular dynamics simulations on Livermore’s high-performance computing resources to demonstrate how confining the particles to smaller sizes increased the cycling speed. They found that thermodynamics favoring the formation of the intermediate solid phases become unfavorable with smaller particle sizes because the solid interfaces that form carry an energy penalty that grows as the particle size decreases. Above a certain threshold for particle size, the intermediate phases always form. Keeping the particle size just below that threshold eliminates the intermediate phases and maximizes the speed of the reaction.

The Livermore research is the first to explain the key role of internal solid interfaces in nanoconfined metal hydrides and to provide practical guidance on how to design a more efficient hydrogen-storage medium. “This fundamental understanding is necessary to elucidate the mechanistic pathways of the reaction,” says Wood, “but it also provides practical design rules.”

Finding the Framework for Better Science

Livermore postdoctoral researcher Shinyoung Kang, who works on many of the Laboratory’s HyMARC projects, explains that one of the team’s goals is to create a development framework. She says, “We want to model realistic materials under actual operating conditions. We are modeling materials at several length scales and integrating our models with experiments.”

In the past, most material characterization was done at the macroscale, while simulations on high-performance computers were limited to the scale of several atoms. High-performance computers are now powerful enough to perform theoretical modeling at larger scales and with greater complexity using density functional theory and quantum molecular dynamics. Experimental techniques have also improved, enabling researchers to use x-ray spectroscopy and spectromicroscopy to analyze materials with unprecedented resolution and chemical accuracy. “We are in a place where we can verify our theories with experiments at different scales. This capability is a success story for the experiment–theory approach to science,” says Kang.

The Holy Grail of Hydrogen Storage

The approach taken by Wood and his team to understand the basic chemistry of potential hydrogen-storage materials helped them better evaluate the obstacles for using another promising metal hydride as a storage medium. Wood says, “Magnesium diboride (MgB2) has been the Holy Grail of hydrogen storage. When hydrogenated, it forms magnesium borohydride. This chemical has one of the highest known theoretical capacities of any material to store hydrogen. However, its hydrogenation reaction is slow—it can take a week to undergo the process—making it unsuitable for transportation applications.” 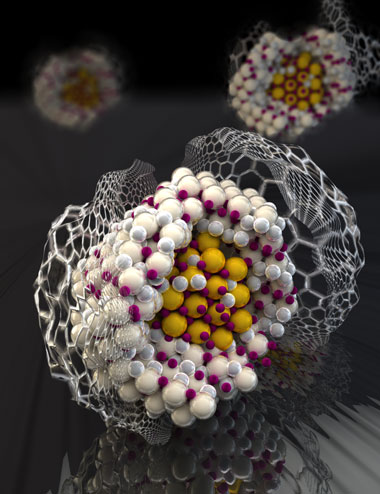 Hydrogenation forms a mixture of lithium amide and hydride as an outer shell around a lithium nitride particle. Shown here, hydrogen molecules (pairs of grey spheres) enter a nanoparticle of lithium amide (beige and magenta spheres) and lithium nitride (yellow and magenta spheres) confined within a graphene shell. This solid can store significantly more hydrogen by volume than a tank of gaseous hydrogen. (Rendering by Alexander Tokarev.)

A research team, involving Wood and Livermore computational physicist Keith Ray as well as spectroscopists Alex Baker and Jon Lee, characterized the reactants at Lawrence Berkeley’s Advanced Light Source to uncover the reason for the material’s sluggish uptake of hydrogen. Computer simulations were performed at Livermore. Hydrogen gas, they found, reacts with MgB2 where the material is “broken”—its ­irregular surfaces at edges and corners. Hydrogen preferentially reacts at these defect sites, suggesting that a faster MgB2 storage medium would have particles possessing a rougher, more irregular structure to maximize the rate of hydrogenation and dehydrogenation. “Understanding the fundamental chemistry of the materials suggests a pathway to better engineering these materials for hydrogen storage,” says Wood. “We have begun investigating whether adding small amounts of other materials to MgB2 increases reaction rates.”

The overall research effort at Livermore is expanding in new directions. The Laboratory is discussing a possible collaboration with NASA on hydrogen-storage materials for deep space flights, such as a mission to Mars. Livermore’s expertise in hydrogen technology and space systems is an ideal match for the work. DOE’s H2@Scale program offers another opportunity because such materials can enable energy storage and avoid curtailing intermittent renewables such as wind and solar. Through this program, Livermore is partnering with the private sector to develop technologies in support of building a distributed hydrogen infrastructure that integrates transportation with the industrial and residential sectors. With so many projects underway, clean hydrogen, a fuel possessing one of the highest energy densities per unit of weight found in nature, is poised to play a significant role in the nation’s economy.