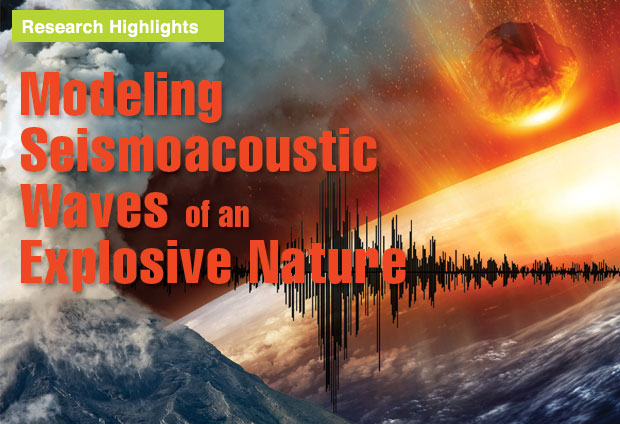 What do an aboveground terrorist explosion, a volcanic eruption, and a meteor impact have in common? These events all release substantial mechanical energy that travels through the ground as seismic waves and through the atmosphere as sound. Scientists have long understood the in-ground propagation of seismic and acoustic waves, but determining the realistic propagation of acoustic waves through the atmosphere and how they interact with seismic waves has not been possible, until now.

Funded by the Laboratory Directed Research and Development (LDRD) Program, a Livermore team led by seismologist Artie Rodgers recently completed a project to develop a first-of-its-kind seismoacoustic simulation capability, known as the ElAc (Elastic and Acoustic) code. ElAc simulates seismic waves in the solid ground, acoustic waves in the atmosphere, and the energy flow between the two. The code can examine waves generated by various sources—lightning strikes, shallow earthquakes, or near-surface explosions, to name a few. ElAc has many applications in national security, including nuclear nonproliferation, nuclear forensics, and energy security.

In particular, Livermore scientists are studying acoustic waves in the infrasound region, at frequencies below 20 hertz (the normal limit of human hearing). In the atmosphere, these low-frequency waves can travel long distances and around obstacles, such as mountain ranges, with little dissipation. Since Earth’s seismic structure remains nearly constant, remote sensors are useful for capturing data on seismic and ground-based acoustic waves, helping scientists detect and characterize an event at standoff distances. Measuring sound waves in the atmosphere is more difficult because the environment is perpetually changing, and thus experiments to measure acoustic waves are not repeatable.

For near-surface energy sources, mechanical waves readily convert from one form to another (seismic or acoustic), especially in areas of varied topography. This energy coupling can be important to accurately represent the wavefield. However, prior to ElAc, no computational tool provided realistic modeling of both seismic and acoustic signals and their interactions. Existing codes included simple, idealized assumptions. For example, infrasound frequencies moved across a flat topography through an atmosphere represented either as a uniform, still medium with no wind, temperature variations, or pressure differences, or with simple altitude-varying properties.

(left) Conventional codes used for seismic modeling, such as Livermore’s SW4, treat the atmosphere as a vacuum when simulating seismic waves from below-surface energetic events. (right) The new ElAc (Elastic and Acoustic) code includes realistic effects of the atmosphere and can model events in the near atmosphere, on the surface, and underground. In the future, ElAc may also be used to model waves in water.

Atmospheric modeling requires the accurate representation of many factors. Kim says, “Wind speed and direction are major considerations in simulating acoustic waves in the atmosphere. For instance, if you stand downwind of a lightning strike, the thunder arrives at your position earlier than if you were standing upwind.” In addition, if a source is close to or far above the ground, the sound speed varies because of differences in air temperature. Acoustic waves can also be reflected or refracted from the boundaries between atmospheric layers.

ElAc models the ground as an anelastic solid material and the atmosphere as an inviscid compressible fluid. The code uses coupled differential equations, called linearized Euler equations, to solve problems related to fluid flow. The code also addresses the interchange of energy between the two environments. “With the ElAc code, we can model mechanical waves—acoustic and seismic—as they move from the atmosphere into the solid earth and vice versa,” says Petersson. “We configured the model so that the two environments ‘talk’ to each other, enabling energy to realistically propagate through the interface.”

Using high-performance computers, ElAc can simulate sound propagation through a fully three-dimensional, complex medium. The code can account for the scattering of sound waves from complex topography (top) and in turbulent atmospheres (bottom).

The interaction between the motions in the atmosphere and the solid ground is achieved by imposing interface conditions along the surface topography. Petersson and Sjogreen discretize the computational domain using curvilinear meshes, where the cells of the meshes are hexahedral. The team also developed new numerical methods for solving the governing equations. In particular, they adapted the “summation by parts” mathematical method. Summation by parts is a class of mathematical methods that are often applied to flow problems, including turbulence and wave propagation. These methods provide highly accurate representations of waves and other small features that travel long distances or persist for extended durations. These new techniques guarantee accuracy and stability of the numerical solution.

To demonstrate the full capabilities of ElAc, the team simulated the propagation of waves from a hypothetical meteor explosion occurring 1,000 meters above Berkeley, California. In this scenario, acoustic waves struck the solid earth and generated rapidly traveling seismic waves. The scenario included a southerly wind that varied depending on the terrain and an atmospheric temperature that decreased from 15°C at the surface to –36°C at an altitude of 8 kilometers. The computational grid had a total of 218 million points, and the 20-second-long scenario comprised more than 15,000 time steps. Time histories of the solution were recorded for two surface stations. The study revealed that the new code could be used to describe how meteorological conditions, including vertical stratification in the low atmosphere and variations in wind speed and direction, affect near-ground sound propagation during controlled explosion experiments. They also found that variations in wind speed dramatically affect local infrasound propagation, and these effects can strongly bias interpretation of infrasound signals.

ElAc has also been used to compute Green’s functions—which characterize response to impulse—for a new method to estimate explosion yield. In fact, the code is key to the lifecycle plan for the National Nuclear Security Administration’s Defense Nuclear Nonproliferation Research and Development Nuclear Forensics Venture. In addition, its ability to produce coupled seismoacoustic simulations will be invaluable for nuclear forensics and explosion-monitoring activities. In the future, the code could be extended to cover longer distances by incorporating Earth’s curvature.

As part of the LDRD project, Kim has also developed a new two-dimensional (2D) acoustic wave propagation code (called AC2D) for modeling acoustic waves from explosions. As Kim notes, “The fully 3D ElAc takes into account all the physics but is expensive in terms of computational resources. The 2D version is much more time and cost effective.” AC2D also includes variations of the atmosphere over land and has uses in nuclear forensics as well as for the Source Physics Experiment (see S&TR, June 2015, Seismic Research Making Waves). “AC2D could also be used for long-range acoustic simulations supporting forensic analyses of explosions or other energetic events at long ranges, up to hundreds of kilometers or more,” says Kim.

According to Rodgers, the LDRD project is enabling new capabilities. “ElAc fills an important gap. The code not only provides an accurate model of seismic waves in the solid earth but also models the atmosphere, including realistic three-dimensional variations in pressure, temperature, and winds.” The result is an enhanced computational tool for investigating source and propagation effects in controlled experiments, providing improved models that can be validated with real-world experiments. Rodgers adds, “ElAc was a truly multidisciplinary project involving experts in applied mathematics, computer science, geophysics, and acoustics and is exemplary of the types of projects in which Livermore excels.”