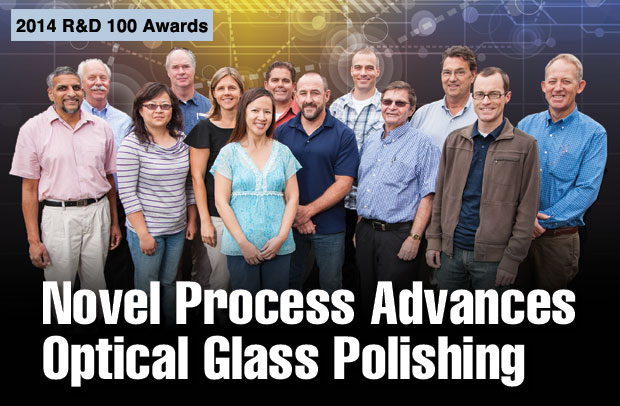 Polishing glass optics to their final shape using conventional full-aperture methods requires multiple process iterations and is labor intensive. However, a new Lawrence Livermore technology, called convergent polishing, markedly reduces the cost, labor, and time required to polish an optic. The novel system, a winner of an R&D 100 Award, polishes in a single iteration both flat and spherical glass components regardless of the workpiece’s initial shape. The process replaces conventional polishing methods that are largely artisan-based. In these methods, skilled laborers, such as master opticians, polish a workpiece through multiple, iterative cycles requiring many interim measurements and process adjustments.

With the new technology, a workpiece can be polished in a single work shift without operator intervention. Initial and intermediate metrology measurements, which add to the length of the process, personnel time, and workpiece handling risk, are not required. While conventional polishing typically requires approximately 24 hours (and occasionally 100 or more hours), the convergent polishing process takes just 4 hours.

The prototype CISR polisher has produced pieces made of fused silica, borosilicate, and phosphate glasses, ranging from 70 to 265 millimeters in diameter or length. Livermore researchers plan to build a second pilot machine, which will be capable of finishing 0.5-meter-scale replacement optics for Livermore’s 192-beam National Ignition Facility. In addition, glass-polishing companies may purchase the rights to build a convergent polishing machine and tailor its specifications to their needs.

Materials scientist Tayyab Suratwala, who led the award-winning team, explains that in the conventional manufacturing of a precision optic, a roughly cut glass slab is slowly polished to a smooth surface of a specified thickness, with a surface height variation of just a few hundred nanometers. The major steps in this tedious process include shaping and grinding (which rapidly removes material), full-aperture polishing (which more slowly removes material across the entire workpiece through chemical–mechanical interactions), and at times small-tool polishing (which is performed over small sections of the workpiece).

Suratwala notes that significant advancements have been made over the past two decades in the shaping, grinding, and small-tool polishing steps to meet increasing demand for high-quality optical components. However, the intermediate step of the finishing process—full-aperture polishing—still lacks a high degree of predictability. This step typically requires skilled opticians to carry out iterative cycles with multiple measurements and adjustments. Often master opticians must supervise the laborious polishing process. “The variety of polishing methods, process variables, and complex chemical and mechanical interactions between the workpiece, polishing pad, and slurry have made it challenging to transform optical polishing from an art to a science,” says Suratwala. 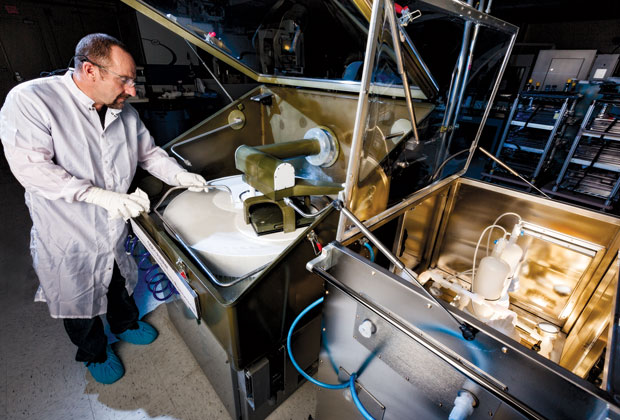 Steele inspects the slurry feed used by the prototype CISR (convergent, initial-surface-independent, single-iteration, rogue-particle-free) polisher. To the right of the polisher is the slurry filtration unit. (Photo by Damien Jemison.)

In contrast, convergent polishing represents a significant change from how full-aperture polishing has been conducted for centuries. During this polishing process, the workpiece “converges” to the desired shape and size. The technologies enabling convergence are built into the design and fixed process parameters of the polisher. The polisher does not use real-time feedback, diagnostics, or computer control. Also, overpolishing is not a risk factor as is common with conventional polishing. The system provides high surface quality, which is achieved by controlling particle-size distribution of the polishing slurry and by preventing the entry or creation of rogue (that is, large) particles that can cause scratches.

Two major principles make convergent polishing possible. First, the factors contributing to nonuniform material removal on the workpiece have been eliminated. As a result, the workpiece surface converges to the desired shape. Second, any rogue particles that enter the system are automatically removed during the polishing process. Consequently, the workpiece experiences very little or no scratching, leading to an extremely smooth surface.

The convergent polishing method reflects the lessons learned during an eight-year research effort by the Livermore optics group. This effort involved understanding the phenomena leading to material removal nonuniformities and the effects and types of rogue particles. The group then developed techniques to eliminate or mitigate these perturbations from the optical polishing process. The many key advances resulting from the study include a novel shaped septum, a material loaded on the pad whose shape compensates for nonuniform pad wear and improves temperature stability and slurry distribution. Another example is a unique blocking technique, called pitch button blocking, which uses droplets of pitch (similar to tar) sandwiched between the workpiece and its weight to prevent the workpiece from bending during mounting and polishing. The technique also minimizes the risk of scratching.

Finally, polishing is performed in a hermetically sealed chamber to eliminate external particles that can lead to surface cracks and scratches, which in turn can increase laser damage susceptibility. The chamber is maintained at a very high humidity so the slurry does not harden, which can cause scratches.

The Livermore team is confident convergent polishing will make a much needed—and long awaited—improvement to a venerable manufacturing process.